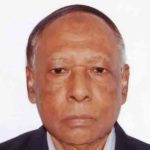 Professor KMS Aziz has over 50 years of leadership in various academic capacities and in national and international institutions including the International Center for Diarrheal Disease Research, Bangladesh (icddr, b), the Bangladesh Academy of Science, North Carolina Central University, the Ministry of Health (Saudi Arabia). In recognition of his outstanding contribution in the field of Oral Rehydration Therapy (ORT) for diarrhea management, the American Association for the Advancement of Science (AAAS) elected him as a fellow in 1985. He is an elected Fellow at Bangladesh Academy of Science, where he also served as the General Secretary (2014-2016).

After obtaining a PhD from Duke University, North Carolina, USA in 1965, he joined as an Associate Professor in the Department of Biology at North Carolina Central University. To serve his country, he returned to Bangladesh in 1966 and started working for Pakistan SEATO Cholera Research Laboratory Research Laboratory (CRL) and played a key role in transforming the CRL into icddr,b, where he served as its Head of Laboratory Sciences Division and as as Associate Director, Training, Extension and Communication from 1978-1986.

Professor Aziz had a pioneering role in to establish the Ethical Review System in Bangladesh. Professor Aziz earned the lifetime achievement award from the Bangladesh Society of Microbiologists in2015 and subsequently honored for the award at icddr, b in 2016. He is the founder Secretary General (1980-Present) of the Asian Conference on Diarrheal Disease and Nutrition (ASCODD) and also the founder Secretary General (1984-1991) of the African Conference on Diarrheal Disease (AFCODD).

He has published over 70 articles in peer-reviewed international journals including publication in Nature, Science and Lancet, and has published numerous popular science articles in the fields of health and environmental sciences.

Apart from scientific career and affiliations, he has remarkable contributions in the national, continental and global sports arena.  He held the position of Secretary General of the Asian Swimming Federation for 21 years, and since then, honorary secretary general (present). He was a member of the Sports Medicine Committee of the distinguished Federation Internationale de Natation (FINA) – he covered five Olympic games during his distinguished sports career. His work in the global sports arena was recognized by numerous awards including the Silver Pin at the Atlanta Olympic Games and the Gold Medal awarded by the Asian Amateur Swimming Federation.